Improve the comfort of your home with our air sealing services

A bunch of small air leaks add up. Not air-sealing your home is like leaving a window or door wide open.

You wouldn’t leave a window open on a cold night during winter with the furnace going full tilt – or on a warm day in summer while running the AC. But that’s exactly what you’re doing if you haven’t air sealed your home!

We will help you determine the best ways to save energy by sealing air leaks that exist in your ducts, around windows and doors, in walls and attic floors, and elsewhere in the home. Doing so will save lost energy and dollars year round. Moreover, your home will now be more comfortable. With our air sealing service, rooms that overheat in the summer because of hot air infiltration will become cool, and rooms that are cool and drafty in the winter because of cold air infiltration will become warm.

What many homeowners do not realize is that it’s not uncommon for a home to have the equivalent of an open window’s worth of air leakage, even when every window is shut tightly! 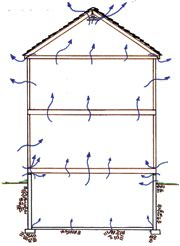 Understanding the “Stack Effect” – The laws of convection cause warm air in your house to rise. As it rises, it moves up through the attic, passing through dozens of cracks and exposed openings. As this air is lost, new air is pulled in from the crawl space, basement, and outside, only to be heated again and lost again. This cycle of air ex-filtrating from the top and infiltrating from the bottom is known as the “stack effect”.

Small Air Leaks Mean Big Money! – When houses leak air, you’re left continuously paying to heat, cool, and dehumidify air from the outside. Air leaks are an enormous waste of energy, and they make it much more costly to keep your house comfortable.  We use a variety of weatherization solutions to protect your home against all types of weather conditions.

Sealing The Top Plate (Most important)

It’s the plates at the top that concern us today because they happen to be the source of significant air leakage in homes. When the drywall crew comes in, they do the ceiling first. When they push the drywall toward the plates, they leave a gap to prevent damage from thermal expansion and contraction.

In most houses, that gap doesn’t get any kind of air sealing, so attic air can leak into the house or conditioned air can be pulled into the attic, depending on the pressure differences. You might think it’s not a big deal because it’s such a small gap in most places, but you’d be wrong.

That small gap often runs for hundreds of feet in a typical house. It’s on both sides of each top plate, and you have top plates on every wall, both interior and exterior. Let’s say you’ve got an average of an eighth of an inch gap that runs 300 feet. That comes out to a hole that’s more than 3 square feet!